What if we used Jupyter as a SOAR?

Today, rightfully, all the rage is on XDR and the broken promises of SOAR and I fully support that feeling: your mileage may vary but, from my experience, developing something sustainable within a SOAR is an endeavor:

Instead of adopting a new way of working, what if we tried to compose with already existing basic bricks to implement something similar? Yeah I know it sounds boring but that’s usually the best way to succeed.

The lingua franca of Infosec is probably Python, and the best way to use it collaboratively is Jupyter(Hub). Let’s experiment with that!

JupyterHub as a SOAR

The detection rules are stored in Splunk as Saved Searches, they generate Notable Events on matches.

Why use a Jupyter notebook to do this dispatching? Because it is very practical to see exactly what happens when there is an exception or error somewhere, debugging is much much easier. 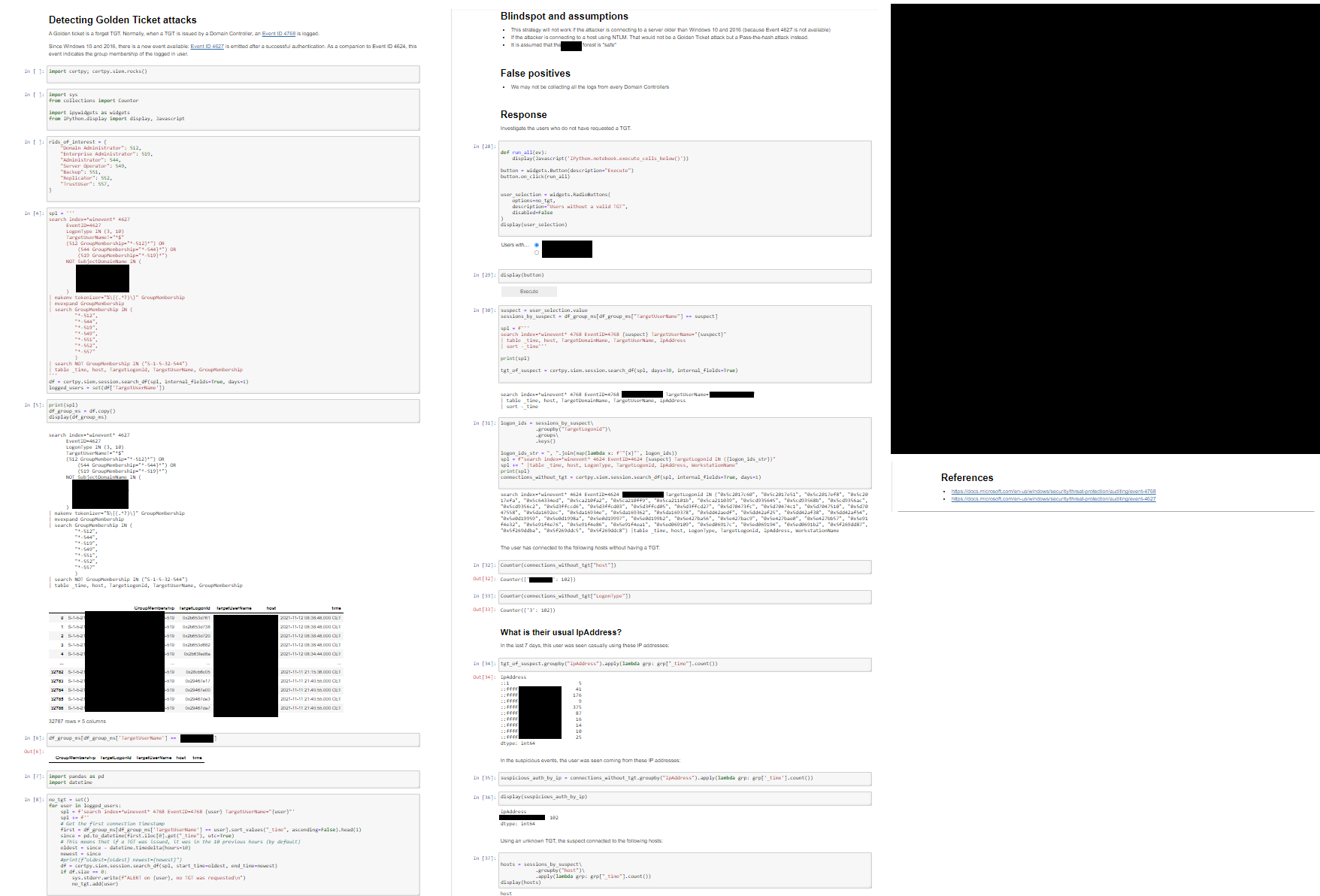 When the Incident Analyst receives the ticket, they access to the collaborative JupyterHub instance and can immediately review the playbook from their Web browser:

From here, the sky is the limit, it is not implemented yet, but we could imagine more follow-up actions like closing and commenting the case in the ticketing system from the notebook automatically. Thanks to the richness of Jupyter’s widgets, it is easy to implement user-friendly actions.

This way of working is also a forcing function to implement as much Python as possible, in this frame, my team developed a Python library called certpy that is the API of the team: every tool used is interfaced in this library and its input and output are consistent along with the different modules.

Full disclosure: I will not lie, this is not running in production even though everything is 💯 functional. Why? Moving to this architecture is a massive change of paradigm to the current teams (60+ people), and making the move would require a lot more investment in the current toolings.

I truly believe in this solution, it is simple and elegant without twisting each of these tools. Furthermore, it doesn’t require a heck of a platform stack: install JupyterHub and you are good to start!

From the human point of view, it only requires the analyst to know a bit of Python, no need to learn a new framework. The interfaces with other SOC tools are made possible thanks to the work of a good internal engineering team developing a SOC library.